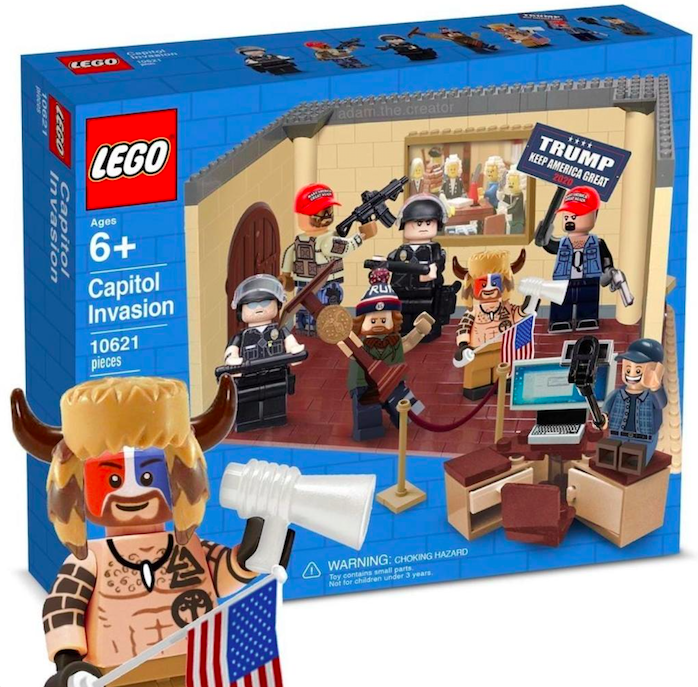 Did LEGO actually release a “Capitol Invasion” building set after the attack on The Capitol by Trump-supporters?

No, it is a fake set. LEGO did not design nor release this set. LEGO creates joyful, family friendly toys, and this set is not and will never be made by the Danish toy company.

The fake set #10621 spread fast on the internet. Was it planned before the attack by the MAGA-mob?

No, this fake product was created as a satirical comment after the after the angry mob attacked the Capitol building in Washington.

Why is number 10621 used as product identifier / item number?

Who are the mini figures featured in the set meant to depict?

From the nation that brought us numerous wars in the name of democracy comes the 2021 hit – The Terrorist Attack on the United States Capitol – orchestrated by the 45th President of the United States Donald Trump.

Donald Trump lost the 2020 election to Joe Biden, but went absolutely nuts and instigated nationwide insanity among his supporters. What better way to defend American values, than having your hang-arounds attack the very core of democracy?

A few other places to waste your time:

PBS: How the attack on the U.S. Capitol unfolded

No votes yet. Be the first - vote now!

Do you want more memes and stupid stuff?

Want to see more memes, gifs and funny pictures? Join us on Twitter, Facebook or Discord and let’s waste a lot of time together!